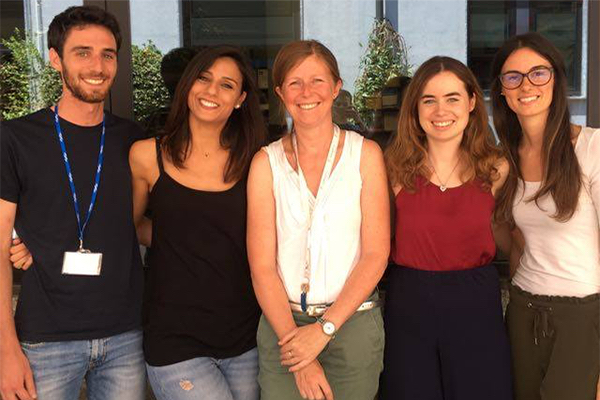 The main focus of the lab is understanding the cellular and molecular mechanisms that control the development of the GnRH-secreting neurons that control reproduction, with the ultimate goal to identify and functionally characterise genetic mutations involved in related forms of neurodevelopmental disorders.  In particular, the laboratory studies since several years the role of a particular class of signalling molecules-semaphorins-in the development of the GnRH and olfactory neuronal systems. During development, GnRH neurons are in fact born in the nasal placode and migrate along intermingled olfactory and vomeronasal axons to reach their final destinations in the hypothalamus.  Defects in the development of such neurons and axons could lead to genetic disorders characterised by GnRH deficit such as Kallmann Syndrome (KS), Hypogonadotropic Hypogonadism and CHARGE syndrome. Our research studies had led to the identification of semaphorins as key factors in the development of GnRH neurons, by predicting/characterising mutations in genes found in patients affected by these disorders. More recently the laboratory is pursuing a new research line aimed at understanding the molecular mechanisms involved in the pathogenesis of CHARGE syndrome, which shares some apsects with KS and HH. In particular the lab is interested to understand  the possible genetic interactions between CHD7 and semaphorins.

The main cell and molecular biology techniques are used in the lab: these include the use of cell culture models to study the functional relevance of mutated gene as well as the use of immortalised GnRH neuron cell lines to study the effects of candidate genes on cell proliferation, adhesion, migration, survival and GnRH secretion. In the lab we are also using the main histological techniques for in situ hybridisation/immunohystochemistry as well as phenotypic analyses of murine models.

The lab collaborates with several basic and clinical research groups nationally and internationally:
-  With the lab directed by Christiana Ruhrberg lab, at UCL (London) on several research projects that involve the role of semaphorins and their receptors in neurodevelopment;
-  With the labs of Professors Leo Dunkel and Mehul Dattani at QMUL and ICH (London) on several projects aimed at functionally characterise the role of mutated genes in patients affected by pubertal disorders;
-  With the clinical group directed by Dr. Marco Bonomi on a funded project aimed at identifying new disease genes involved in HH and KS.
Our group also actively collaborates with several groups present in our and other Unimi Departments as well as with groups at the San Raffaele Institute.